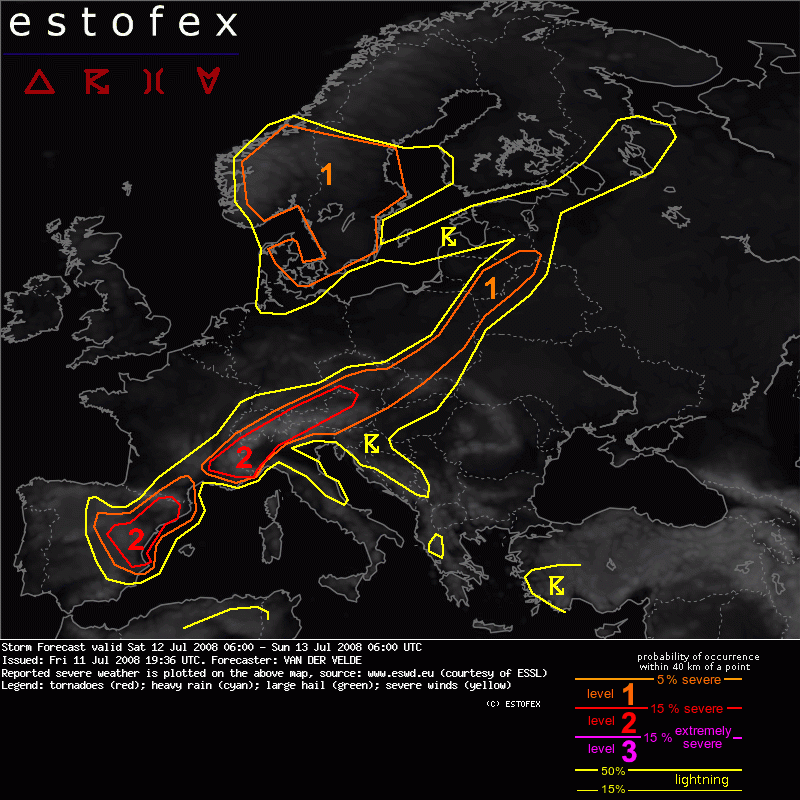 A positively-tilted, strong Atlantic trough arrives to the Iberian Peninsula. Large synoptic ascent is forecast at its warm side over Spain and later over SE-France. GFS runs have produced the greatest ascent for a given time increasingly more eastward. If this trend continues, the main focus of severe weather would shift from Spain to SE-France.

A long cold front has stagnated and some warm frontal waves are indicated in GFS in the region of Austria, another one over Poland.
Through the entire frontal region, 500-1500 J/kg MLCAPE, and at least >10 m/s deep layer shear over 0-6 km should be present. Multicells are the dominant mode in this case, with marginal supercells possible in areas with SREH enhanced over 150 m2/s2 (much of the region). The western Alpine region should reach double this amount (20 m/s DLS), and really strong values of 25-35 m/s DLS are forecast over eastern Spain and southern France. Supercells are a viable mode of storm organization in these areas.

Unstable airmass in reach of the Scandinavian low pressure area is likely to produce lots of small thundery showers, and weak winds and strong low level lapse rates and LL buoyancy could lead to occurrence of landspouts, if a source of vertical vorticity could be located.

As indicated in the synopic section, the combination of reasonable CAPE and excellent DLS (up to 40 m/s!) with 0-3 km SREH between 100 and 250 m2/s2 strongly suggests supercells during the afternoon and early evening, producing large/very large hail and possibly severe gusts. Tornado chances seem to remain limited looking at relatively weak 0-1 km shear, but with 0-3 km shear being instead >15 m/s, they are not ruled out. One or more mesoscale convective systems develop out of these storms with gusts that may be severe and beyond local scale, with severe bow echoes possible in the good 0-3 km shear. The most favored for the MCSses is the eastern-most strip of Spain.

This area basically is under the same regime as the former, but the main QG ascent of the trough will be stronger and arrive a bit later (SE France, NW Italy, Switzerland). 0-3 km SREH is boosted in the latest GFS 12Z to 400 m2/s2, so gust / tornado chances are more enhanced yet. Large hail is the main risk in the storms developing mostly over orography during the afternoon, this also goes for the eastern extensions to Austria and Bavaria. Large amounts of rain can fall due to MCS activity at the west side of the Alps.

A maxima in SREH >250 m2/s2 and LLS > 10 m/s are forecast along frontal waves in this region (NE Poland, S Poland, Estonia/Russia), and MLCAPE is predicted to be in the higher end (>1000 J/kg). Multicells and supercells could develop with mainly large hail, and may cluster into MCS possibly with strong/severe gusts.