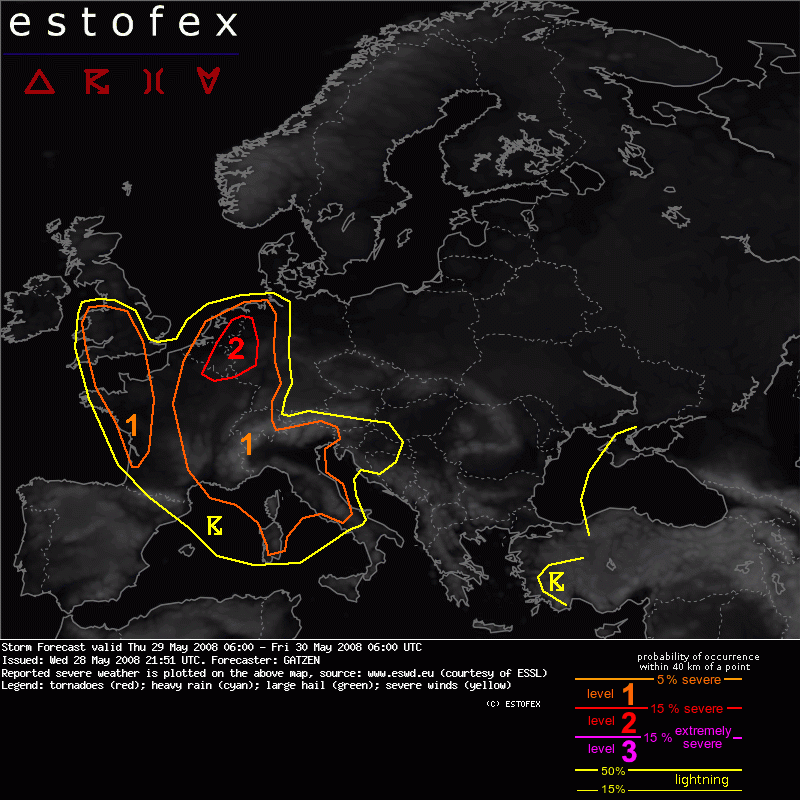 West European trough moves northward as southern main vort-max/short-wave trough axis turns from Tunisia into west Mediterranean. This negatively tilted and quite intense short-wave trough will provide QG forcing due to strong DCVA over west/north-west Mediterranean during the period. Affected air mass is slightly unstable due to rather moist low levels and neutral to slightly unstable lapse rates. Further north and east, hot subtropical air mass originating from northern Tunisia is present in the range of a high from Adriatic to Germany. Steep mid-level lapse rates are indicated by latest soundings over this region. Quite cool air mass is present in the range of two long-wave troughs over western, and eastern Europe.

Strong southerly to south-easterly jet moves across Germany, where subtropical air mass characterized by steep mid-level lapse rates remains. In the boundary layer, moisture is expected to increase and CAPE will likely reach up to 2000 J/kg. Initiation will be uncertain again given strong capping inversion over most places. Cap will weaken further west near the German/French border, where initiation is most likely in the range of a weak convergence line. Thunderstorms that form will likely develop into supercells capable of producing large or very large hail as well as severe wind gusts given dry mid-level air mass. Due to cold pool formation, thunderstorms may cluster while moving rapidly northward into Benelux and north-western Germany. Tornadoes are forecast especially from the Netherlands to north-western Germany and Rhine valley, where high low-level helicity will develop in the evening hours. Given strong low-level vertical wind shear of more than 12 m/s in the lowest kilometer, even strong tornadoes are not ruled out. To the east and southeast, strong capping inversion and large scale sinking may suppress deep convection. However, every storm that may develop has the potential to become severe quickly, and an update may be necessary.

Ahead of the intense negatively tilted trough axis, a strong upper jet streak moves northward over northwest Mediterranean and western France. Strong QG forcing is expected especially over north-west Mediterranean. Affected air mass is characterized by neutral or slightly unstable lapse rates and rather rich low-level moisture over the Mediterranean Sea as indicated by latest Palma De Mallorca sounding. To the east, even steep mid-level lapse rates may be present over northern Italy. Given strong QG forcing and weak CIN underneath the trough axis as well as weakening cap over Italy/southern France, expect rather widespread precipitation over the northern and north-western Mediterranean. Convection may be embedded in stratiform clouds. In the range of the jet streak north of the trough axis, strong vertical wind shear will be present, reaching 25 m/s 0-6 km, 20 0-3 km, and 10 0-1 km vertical wind shear from Italy to southern France. Veering profiles and high low-level helicity may favor tornadic supercells. Limiting factor is rather weak low-level buoyancy over the sea, so tornado threat will be enhanced over the land. Large hail and damaging wind gusts may also occur. Convection may merge into one or two MCS moving northward, and local flash flooding is not excluded during the night hours.

Given uncertainty about instability, a level 1 is issued that may be upgraded during the period when low-level buoyancy will turn out to be stronger over Italy/southern France than anticipated.

At the cyclonic flank of strong upper jet streak, strong QG forcing will likely lead to convection during the day. Affected air mass is quite moist and low-level heating may produce low-level buoyancy. Some weak tornadoes may develop with convective cells that form in this thermodynamic environment.