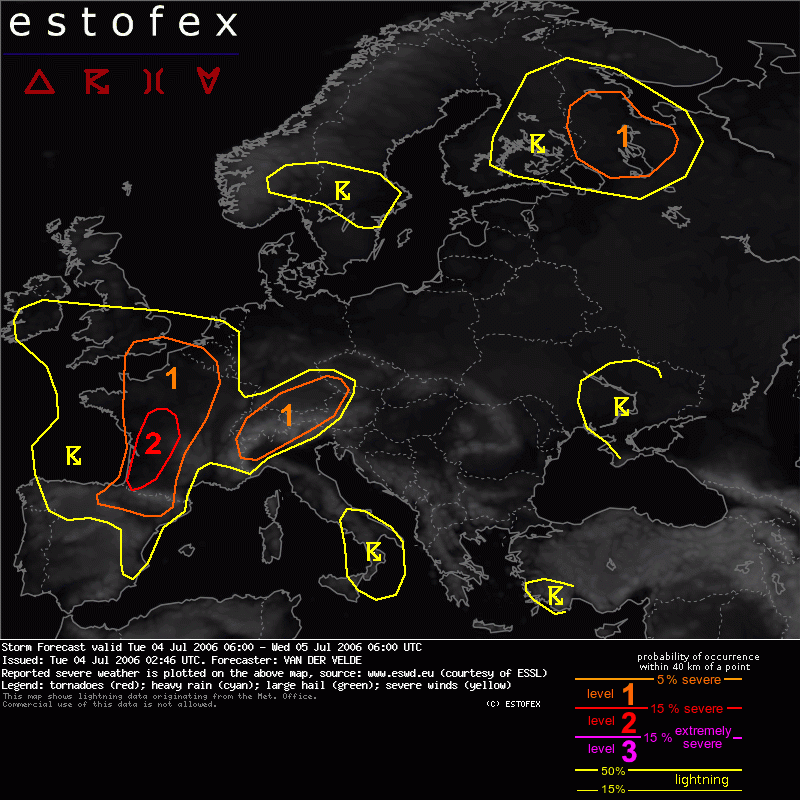 An upper longwave trough with its axis between Ireland and Portugal produces an active convective weather regime over western Europe. A midlevel PVA max and warm air advection induce the development of a thermal low over southwestern France. This development seems to have been delayed somewhat in recent GFS model runs. GFS 18Z forecasts this low and strong 10m convergence at 18Z in the level 2 area, and at 21Z in the north part of that area. GFS06Z had this feature already in northern France at 21Z.

Another low is moving over Finland and northwestern Russia, with a cold front/occlusion stretching all the way into Sweden (turning into warm front).

A large area should see MLCAPE (50 hPa)values ranging from 800-2000 J/kg, with deep layer shear over 15 m/s, locally >100 m2/s2 SREH, to over 20 m/s with SREH values higher than 200 m2/s2 possible in southwestern France. It is in the latter area that the low starts to develop, with GFS forecasting convective precip from 18Z-03Z. The strong shear and sr-helicity are likely to produce supercells in the late afternoon and early evening, with a chance of large hail (possibly extremely large) and severe downburst gusts: at 15Z the LCL-LFC difference becomes zero while LCL heights are around 2500m in this area, so that downdrafts can become more than 15 degrees cooler than the vicinity. At 18Z, strong low level convergence and upper PVA should come together and will organize a linear MCS bearing a threat of widespread severe gusts, especially near bowing segments. Mid/low level winds will be nothing special so that extremely severe gusts should be rare. Large hail will also locally be possible. This system will move north/northeastward and reach northwestern France in the late night.

In addition, models hint at convection in the afternoon over central and northern France, which may be in multi- or supercell mode, with a chance of large hail. This may also spawn an MCS/cluster in the evening near Belgium and perhaps the Channel area. This convection is expected to have lower coverage of severe weather.

A fair amount of CAPE is present in a weakly sheared, but dry environment. The isolated storms that develop over orography can contain marginally large hail and isolated severe gusts.

A cold front with clear theta-e ridge at the nose of the jet may yield a line of convection.
The instability is not expected to reach to very cold levels, but moderate/good shear/wind conditions over a large area and low LCLs suggest a chance for isolated severe gusts, possibly a tornado (LCL<1000m, LLS>10 m/s, DLS >15 m/s)