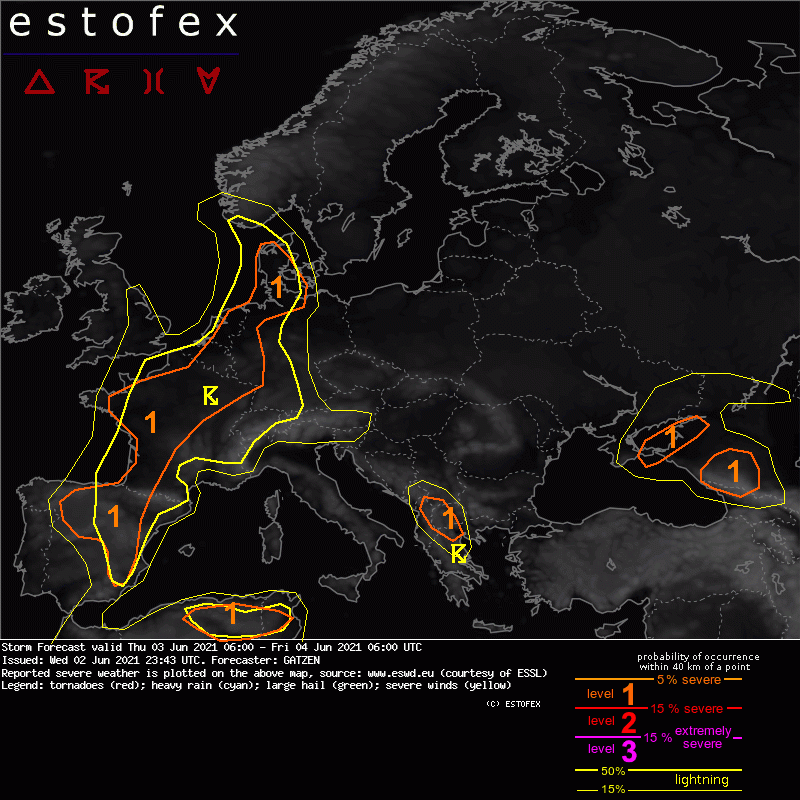 A level 1 was issued across northern and eastern Spain and western France for large hail.

A level 1 was issued across central and north-eastern France, Benelux, and western Germany for extreme rainfall.

A level 1 was issued for northern Germany and Denmark for large hail.

A level 1 was issued for northern Algeria for severe wind gusts.

A level 1 was issued for Albania and northern Greece and Republic of North Macedonia for large hail.

A level 1 was issued for eastern Ukraine and southern Russia for extreme rainfall.

A level 1 was issued for the Caucasus region for large hail.

A high-over-low blocking is persisting across eastern Europe, with a east-Scandinavian high flanked by a quasi-stationary trough over the Black Sea area and a cut-off over the North Sea. Upstream, a subtropic high ridges into the west Mediterranean, yielding a strong south-westerly mid-level flow at its periphery over western Europe.

With southerly winds, warm air has spread into western Europe ahead of a frontal boundary extending from Portugal to the Bay of Biscay and farther into England. Most of the continent, however, is influenced by an easterly, rather dry low-level flow that causes a rather quiet convective day.

Some QG forcing will be present on the cool side of the frontal boundary that partly affects the warm air mass to the east. Increased low-level convergence and frontogenesis is expected with some moisture increase especially across France that overlaps with modest lapse rates. Over Spain, steep lapse rates are expected whereas low-level moisture is weaker. Both areas will see MLCAPE around 500 J/kg.

Initiation of storms is expected along the frontal boundary and over the mountains across Spain. Storm organization increases from east to west with increasing deep layer shear, from single cells at the eastern edge of the level 1 to supercells in the western part, where DLS is around 20 m/s.

Main threat is large hail with stronger storms. However, clusters of storms forming along the boundary may also produce extreme rainfall and severe wind gusts locally. Merging storms may go on through-out the night, when elevated convection becomes more likely and severe wind risk is expected to decrease.

In weak flow, diurnally driven single cell storms are expected to develop in a moist and unstable air mass. Focus of convection initiation will be outflow boundaries left behind be previous storms. These are capable of extreme local rainfall due to expected skinny and moist profiles, rather extensive warm cloud depth, and the slow storm motion.

At the south-eastern flank of the cut-off low, a plume of elevated lapse rates is advected towards Denmark. Next to elevated storms in the warm advection regime across the North Sea, diurnal heating will result in MLCAPE around 500 J/kg. Moist profiles will be more supportive for storms than on the previous day. With DLS around 15-20 m/s, multi- and supercells are forecast. These will be capable of large hail. A rather low risk of severe wind gusts and extreme rain is given as well.

After a day with thunderstorms, a moist air mass is present across the Atlas mountains. In the wake of a short-wave trough, QG forcing will be weak, but strong diurnal heating will support new storms in the afternoon and evening. Weaker shear is expected, but given high LCLs and inverted-v-profiles, some severe wind gusts are forecast.

Albania and northern Greece and Republic of North Macedonia

A marginal level 1 was issued for this area due to a passing short-wave trough embedded in the north-westerly flow over the Balkans. Indeed, initiation is questionable due to weak CAPE and rather dry profiles. However, storms that form may organize in 15 m/s deep-layer shear, and a few hail events are not ruled out.

At the northern flank of the Black Sea trough, lapse rates have weakened recently. Still, some weak CAPE is expected to develop in a moist air mass due to some boundary-layer heating. Skinny CAPE profiles and slow storm motion will support some heavy rain in this area.

Weak CAPE is expected in this region due to rather weak lapse rates and limited moisture. However, over the mountains, a few storms may develop despite the strong shear. If storms will mange to overcome all these limiting factors, supercells are possible and a few large hail events are not ruled out.